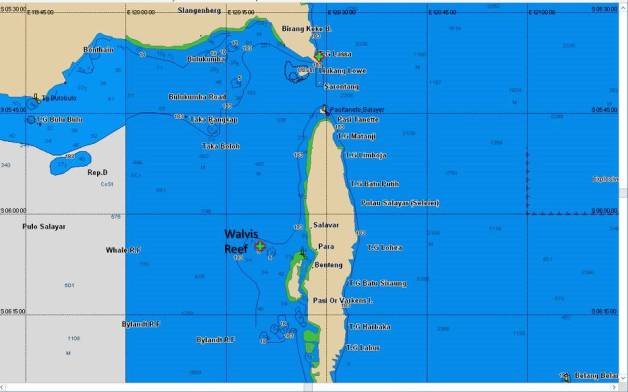 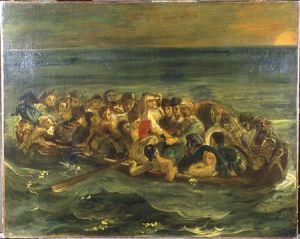 Eugène Delacroix, ‘The Shipwreck of Don Juan’, about 1840

The events around her foundering are reported in the DR of 1663, amongst others on pgs. 276, 283ff and 391f.  Having left Rembang on Java after a rather unfortunate voyage thither from Batavia (the skipper and five other persons aboard had died at Jepara, thus delaying the voyage considerably) on December 31, 1662, the Walvis seven days later, at about 1000hrs, ‘in hazy weather, having endured some days before a heavy storm’, ran onto ‘a reef near Selayar known in some charts and in others not, situated very dangerously for those who sail from Makassar to Bima, […] being coral stones and sand’.  60 of the 162 people aboard the ship ‘immediately’ took to the boat the vessel had towed behind, ‘leaving the others in the ship’ that, reportedly, ‘fell into pieces’ in half-an-hour, so that ‘nothing on the world could be salvaged from her except the naked people, who drifted ashore with pieces of the ship’. 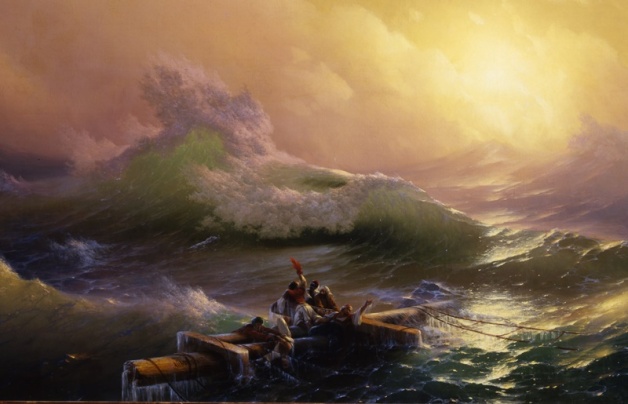 Despite the recent conflict between the VOC and Makassar, Selayar’s overlord, the survivors were received peacefully.  Having spent their first night ‘wet and cold’ on the island Pasi in front of today’s town of Benteng, on the next day the shipwrecked were visited by the local raja – ‘who, understanding the circumstances of their accident, did not reject them, but sought his vantage with these peoples’ calamity’, letting the Dutch pay dearly for the provisions without which they ‘would have had to die from hunger’.  The arrival of the about 140 survivors of the shipwreck, however, soon became a burden for the notoriously poor inhabitants of Selayar: When the Dutch resident in Makassar eventually received news of the disaster and organised a first rescue party that arrived in Selayar in early February, the shipwrecked had been divided into a number of coastal villages ‘to obtain a better fare’ – nonetheless, they by then were ‘in great misery, having used up most of their victuals’. 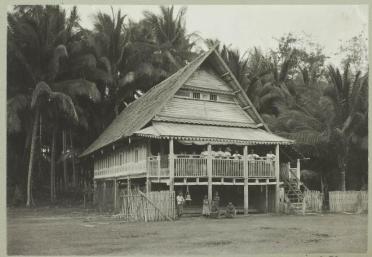 House of the Chief of the town of Benteng, Selayar, c.1911

Recollecting the shipwrecked proofed a lengthy affair.  The release of a Dutch boy detained by another local raja could only be negotiated with great difficulties; return of five of the Company’s slaves, though, could not be arranged: The potentate maintained that he would not obey any pertinent orders by the king of Makassar, for ‘he is as much king in his place as is the king of Makassar in Makassar, claiming ownership over the mentioned slaves, as he had given them boarding while they had been there’.  Some 16 people went with a local craft to Makassar; ’14 white persons and 15 slaves of the company’ plus the officers of the ship joined the first rescue party; and only in March the jacht Leeuwin picked up the remaining 90 survivors of the ship’s company, ‘amongst whom were many sick’ – ‘the rest had drowned, so that [now] no people were left over’.  The ship’s quartermaster, a certain Abraham Florisz., ‘had  betaken himself from the troop to the Makassarese and had himself circumcised’ and was appropriately punished after the Leeuwin‘s arrival in Ternate. 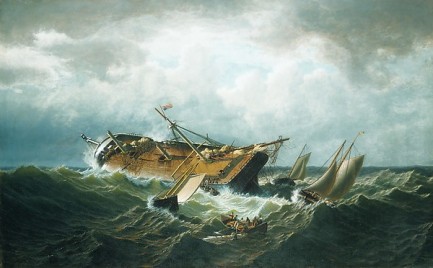 The remnants of ship and cargo became another problem.  Some time after the stranding ‘the steersman went with the dinghy to the wreck, but came back empty handed’ – yet, rumours had it that much of the goods ‘belonging to the Company as well as to the ship’s company had been taken to the village of Bonea, and fair hope was rising regarding the acquirement of these’.  However, already shortly after the Walvis‘ foundering,

sixteen of its cannon plus other goods [amongst others, three anchors and much of the ship’s cordage], were seized by the followers of Karaeng Tallo and Karaeng Sumanna [two leading Makassar nobles].  Later the Company demanded the return of the cannons, but this request was refused by Karaeng Sumanna who replied that “since he had fished them out of the sea, they now belonged to him”.  Although Karaeng Sumanna later returned half of the cannons, this was only accomplished after long negotiations and important concessions by the Dutch. (Andaya, L., 1981: The Heritage of Arung Palakka. Verhandelingen van het KITLV, 91, ‘sGravenhage: Martinus Nijhoff, pg.62). 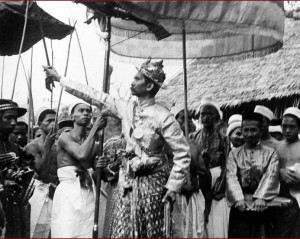 The frugal company apparently intended to bargain a compensation rightfully due to Karaeng Sumanna for a share he had in a ship the Dutch had taken off Solor against the canon salvaged from the wreck, and at some point even hoped that Sumanna’s people would ‘collect the remaining woodwork of the unfortunate vessel’.  However, the Walvis incident, combined with the case of a Dutch deserter by the name of Adrichem and the stranding of the ship Leeuwin on the Doangdoangan Islands in 1664 instigated lengthy diplomatic quarrels between Makassar and the VOC.  In 1666, on the very eve of the ultimate confrontation between the Dutch and Makassar, return of the Walvis‘ artillery was one of the foremost points in the list of the VOC’s final demands.